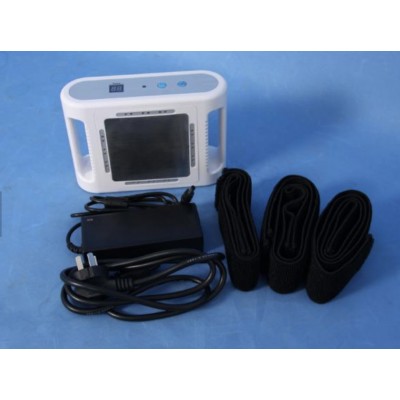 Cryolipolysis device -14 degrees for domestic use for treatment of greasy bulges, belly, love handles, back, arms, legs. Membranes included to perform multiple treatments depending on the pack chosen because the 28x28 cm membranes can be cut to be used on 4 different areas.

On the contrary, adjacent elements such as blood vessels, peripheral nervous system, melanocytes, fibrocytes, lipid-poor cells, are by comparison much less sensitive to cold.

This feature allows the natural degradation of fat cells without damaging adjacent tissues.

The process of degradation of fat cells exposed to the action of cryolipolysis is as follows:

Duration of treatment and number of sessions

Depending on the size of the area to be treated, it may be necessary to make a new application to cover the entire area.

Depending on the thickness of the adipose tissue and the desired reduction, several sessions should be scheduled, spaced 2 days apart.

The results are visible quickly.

Feelings during and after the session

During the session,the process is not painful, you feel a localized feeling of cold, especially at the beginning of the session.

Fat cells eliminated by the treatment of cryolipolysis gradually release their lipids, before being permanently absorbed by the metabolism naturally (macrophagia).

Cryolipolysis is particularly suitable for localized adiposities, such as those on the belly, waist, back, arms, horse pants, double chin, cervical bump called buffalo hump, etc.

Strengths and differences in cryolipolysis with other systems

The method of selective and controlled cooling of fat cells, allows a noticeable and natural reduction of fat without the trauma of invasive methods (liposuction) and without the risk of damaging adjacent tissues.

Cryolipolysis descends to -1oC on the surface of the skin, and diffuses a controlled cooling that reaches - 14 degrees Celsius in depth. The temperature is of course changed given the warming created by your body temperature

This device will be delivered with a care protocol

1-year warranty, delivery and service: This device will be delivered to you by Carrier. Our sales team is at your disposal to help you put your device into service and guide you in your care.

Be the first to write your review!